He still enjoys swimming & bodysurfing....and firmly believes that his experiences swimming with Sharks prepared him for negotiating great deals with vendors whose fins aren't always visible from above the waterline.

After graduating from the University of Delaware, Peter immediately found his niche in advertising, marketing, and sales promotion, starting with a two year stint at a prestigious Madison Avenue advertising agency, Jordan, Case & McGrath. He worked on Tonka Toys, TUMS Antacid & Nestle Candy Bars. But the times, they were a changing, and he couldn't resist the lure of the Golden State, so, he moved to San Francisco to tackle a more demanding position at the nationally acclaimed advertising agency, Hal Riney & Partners. That's where Peter enjoyed implementing advertising campaigns for The Stroh Brewery, Dell Computer and Revlon, in addition to prominent west coast clients, such as Henry Weinhards Private Reserve, The Aspen Skiing Company & See's Candies.

Peter soon added sales promotion to his marketing repertoire, moving to Tasco Industries. His forte was selling advertising specialties, corporate gifts and awards programs throughout the hospitality industry and the national business community. In fact, he was consistently one of Tasco's top salespeople for ten years.

In 2007 Peter recognized that the synergy of his skills could add a tremendous value to the endeavors of any client he ever had in any industry, so he founded Triplegood Promotional Marketing, a member of the Advertising Specialty Institute (ASI).

Peter often boasts about his own "triplegood fortune"......one incredibly enchanting & wicked smart wife....and three incredible sons who seem to like swimming, surfing & water sports as much as he does. 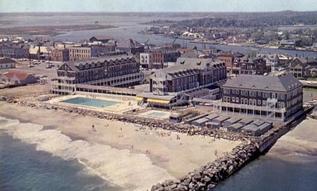 for Your Next Marketing Program or Special Event

It all began for Peter on the Jersey Shore, with a few competitive swimming championships and the occasional lifeguard gig on the sandy beaches of the Atlantic Ocean.